Day 4 has come and gone and it was less exciting then other days.

The morning started out bright, sunny and warm. I believe it was 79 degrees when I went to visit the hubby in the morning around 6am. I know it was pretty, and I can tell there should be color there, but unfortunately for me it is pretty grey. However, for your enjoyment the photo is color. 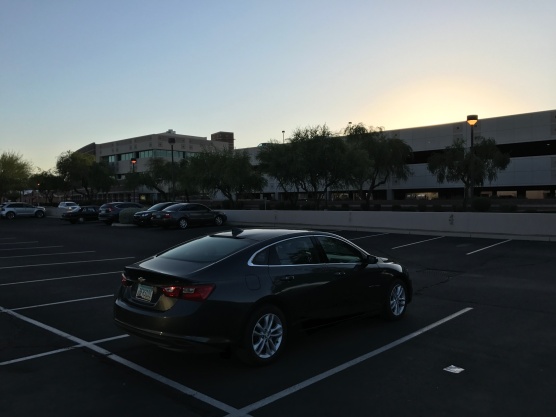 Today was fantastic. The hubby was rested up a bit more, he was feeling pretty good and was more talkative. He still occasionally drifted off, but we spent a lot of time on and off. I ended up going over I think it was four times. I would stay for an hour or two, come back to the hotel room. I would have stayed longer but I think I was having heat issues, it is too damn hot.

I went and picked up some lunch/dinner between third and fourth visit. Wolsey had mentioned people don’t buy ice cream and go home with it when they eat out, that it melts too soon. I will be honest, I thought that was bullshit, so I went and ordered two cheeseburgers and a small shake from McDonalds. I was in an air conditioned car (that was chilly), went through drive through and went straight home. The shake was in good shape when I stopped at the hotel. I got out and walked about 40 feet to the door to inside the hotel, then another 100 feet, I  got back to the hotel room and it was completely melted. I had been proven wrong, and hubby was completely right.

Torie did feed Ghost tonight as well, she sent a picture, evidently tonight was not as good. We have five more nights to go, but he will be ok, probably just a little feral. I am grateful that Torie is doing this, he would have been so much worse in a kennel.

I collapsed in bed and napped a little. Then went back and visited him for the final time. I got back and was anxious that he wasn’t there so I did some Order of Battle let’s play (military strategy game). I then crawled in bed and was completely exhausted.

Oh, and I was awoken by HBO playing Crimson Peaks, and one of the spirits was screaming, ya that wasn’t fun.

Probably the last current selfie I will take for 10 days or so, have to grow beard out for electrolysis next weekend. Probably some electrolysis photos will be posted though. And I have a bunch of previous that will go up. #selfie #transselfie #mtf #trans #transgirl #transgender
Quick photo, done with multiple medical apts and now up to Bellingham to clean up parents grave and see my little brother. Then down to Bothell to have dinner with Torie.
Throwback Thursday
Good morning from the hubby last weekend. #hubby #ftm #trans #hot #forever
Half the day will be in training at work… I hate training. #selfie #mtf #transgirl #transgender #transselfie #work #morning #goodmorning
(2/2) We had a carpet picnic on Sunday. The hubby was tolerating my photography while tally is tally.