Disclaimer: There are of course exceptions to everything, this post is about the generality of Generation X.

As a member of Generation X, I used to always wonder why the media is fairly silent on my generation in comparison to the Baby Boomers and the Millennials. If you watch the news, or read articles online, Generation X is almost non-existent in the discussion. I used to be annoyed about it, would grump at people and wonder not only where we the latchkey generation as kids, evidently we were also that way as adults. I found an interesting article on Business Insider that covered it a little here that did back me up a bit.

My grumpiness about Gen X has changed though when I realized an important point. We really aren’t a separate generation, rather we are sort of the place between generations, the grey area where boomers and millennials touch. My husband and I have talked about it for years now and it has become a lot clearer. We really don’t have our own place. 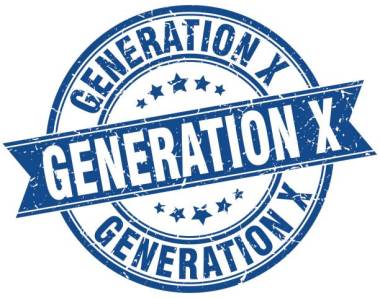 Don’t get me wrong, Gen X does exist, there are things about our generation other than the music and some movies that aren’t present before or after, but we don’t really have any things that we can show off as our own. Unless of course you count that we have been hit by a lot of recessions and we aren’t quite young enough to change it around like the Millennials can, while not having the resources to start with that the Boomers had.

Our generation is divided between the boomers and the millennials. I realized this as I watched my friends fall into those two categories as we have gotten older. Now that I am on the higher half of my forties I realize some are boomers, some are millennials.

The boomers overall have kept to their parents outlooks. Generally more conservative, more religious and believing that things shouldn’t changed. These are the people more likely to talk about making America great again. They don’t like society changing, they think everything is going to hell in a hand basket and don’t believe in same sex marriage or gender identity. They believe in owning the biggest homes they can, the nicest cars, working the best jobs even if its at 80 hours or more a week and that the economy will fix everything so capitalism is good.

The second half is where I believe you first see the ideals of Millennials had started. The people who keep up with technology, who believe in equal rights, same sex marriage and that people can determine what gender they are based on what is right for them. Same group that doesn’t believe wealth is the way to success and that they have to maintain the planet for future generations, whether or not they have children. Most have cut the cord to their TV.

This placement between generations doesn’t seem to be the first time. There are other generations just in the last century that appear to be a parallel to Gen X in their invisibility, and as buffer between generations. These include “The Lost Generation“, people who came to adulthood during the First World War. You hear a lot about their children, the “Greatest Generation” that fought World War II and brought our economy to become the leader of the Free World, but you never really hear about them.  The “Lost Generation” underwent the horrors of World War I, and especially in Europe, but also in America the generation was shattered by that war, and never recovered fully.

“The Silent Generation” that grew up between the “Greatest Generation” and the Baby Boomers. Some of them fought in World War II, but most came of age in the late 1940s and 50s and fought in Korea and early Vietnam. They were sometimes considered the luckiest generation as they came after World War II so they were not as likely to see combat (Korean War had much less casualties and a lot smaller military), they enjoyed the increase in lifestyle, retired the earliest out of everyone but with all that no one really talks about them. Their deeds are often assigned to the Baby Boomers, but in fact many of those Civil Rights Movements were pushed by the Silent Generation (Martin Luther King Jr. was a Silent Generation member)

It makes me wonder if the cycle for the generations is longer then we try to make it.

With my experience of Gen X, I wonder if we need to span 30-40 years for each generation, with a known grey area between. That would explain a lot to me about Gen X and why we seem to be conglomeration of Boomers and Millennials, just either too young or too old to fit those designations at this point. It would also explain why the Lost and the Silent Generations, each sandwiched between two other talked about generations didn’t get much recognition as their own and seemed to have the same situation where many of their people fit into the generation before and after them.

So nowadays when people ask me at work to form into groups or to express who I identify with, I generally identify with the Millennials. That being said, I still have no idea what happened to Generation X.

The testing was a failure. The testing is to confirm my esophagus is capable of having a hernia surgery. I throw up multiple times daily for last several years and they think it’s probably the hernia I have.
Someone does not like the smell of the nose tube and gear. Tally disapproves! #tally #tallydisapproves #tallyoneeyedcat #tallythepiratequeen #cat #cats #oneeyedcat #oneeyedcats
90 minutes after that last photo. The scoping was a tube 3 times bigger than this one, so this wasn’t as bad.
Throwback Thursday, Here is me visiting my grandmother Elizabeth when I was 1 or 2, sometime late 1972 or early 1973 at “Purdy”, aka Washington Correction Center for Women which is one of two women’s prisons in Washington State.
Heading out with no makeup and looking grungy to get my esophageal manometry. Going to scope my esophagus and stomach to make sure I can get a hernia surgery. Next photo will be me with the tube/sensor I ha e to have through my nose and into my esophagus just above my stomach sphincter. Fun times! #mtf #selfie #transselfie #transgender #medical #EsophagealManometry
Just an FYI, if she ever lied and says we abuse her, know that Tally is a cat and therefore a liar. Look at all the “abuse” she puts up with. #tally #oneeyedcat #cat #tallythepirate #tallythepirateprincess #tallythepiratequeen