Wraith, Combat Decker (before they were a thing) Pencil Sketch 1991 – Shadowrun 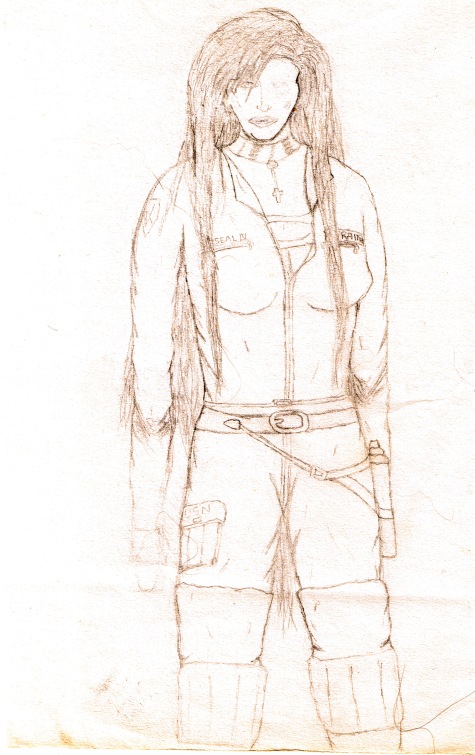 Wraith was my first female pc. I had run as a GM several female NPCs and they had always been my favorite to fall back on. Once I ran Wraith as a player I never really went back for male characters. After that point I can only remember three male characters in thirty years. One was Grim, an ex-FBI sorcery adept in shadowrun, one was Shaan from my most recent Battletech game, and a very short lived character in a hubby game.

This was probably the first adult indication of who I was (not her personality), and that I preferred to be a female character in a game. I knew at this time what I felt I was, but in no way did I ever think I could jump the divide so I buried it.

I think the image is based on an in-game situation when we were imitating being a special forces team, or it could have been Bryon’s “Abyss” run, a shadowrun mission roughly based on the movie the Abyss. A lot of his games tended to fully imitate movies/tv shows for missions or characters this is not unusual, every GM does it, but I try to hide the details enough that at first glance you can’t tell.

Dropped hubby off at work today. #forever #love #hubby #thebesthubbyever
Probably the last current selfie I will take for 10 days or so, have to grow beard out for electrolysis next weekend. Probably some electrolysis photos will be posted though. And I have a bunch of previous that will go up. #selfie #transselfie #mtf #trans #transgirl #transgender
Quick photo, done with multiple medical apts and now up to Bellingham to clean up parents grave and see my little brother. Then down to Bothell to have dinner with Torie.
Throwback Thursday
Good morning from the hubby last weekend. #hubby #ftm #trans #hot #forever
Half the day will be in training at work… I hate training. #selfie #mtf #transgirl #transgender #transselfie #work #morning #goodmorning