I never really thought about what I looked like when I stared at myself in the mirror. I generally would just groom and move on. It is just a station to stop at and fix up as best I can what I see in the mirror.

It is strange now that I have lost more than 105lbs, I am under 200lbs for the first time since I was 18. That combined with the fact that I am growing my beard out for electrolysis and causing a huge influx of dysphoria (which I will talk about more later) and the final touch realizing that most of the brown in my beard is gone due to laser hair removal means it is mostly a glint of silvery white. 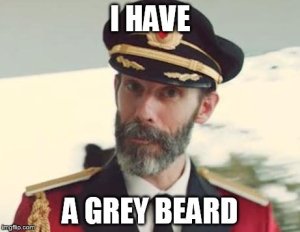 Combine that with my longer thinner face and my hair is still brown means I am looking at myself in the mirror and realize I once again look vaguely like my father around this age. Especially when I catch it in the corner of my eyes, it catches me off guard. Not in a bad way, he wasn’t an unattractive man. I don’t hate the sight of him.  I loved him dearly even with the alcoholism and other issues. It just wasn’t something I expected to see again.

When I was 18-19 and I first started dating the hubby I looked similar to now (just 30 years younger of course). I had more than one occasion where I would walk the hubby down the street (he was a tiny, very very attractive punk rock girl at the time, since this was 24 years before his transition) and people would comment back to my mom that they saw “John” down on Railroad (the local bar road) with a younger girl.

It got my dad in trouble a couple of times for stuff he hadn’t done, and I never understood it. I never really thought we looked alike (although looking at a photo album I can see what people were saying). We even had one person step out of a bar and start calling my dad’s name when I had walked by with my hand around Wolsey’s waist. Of course when they got outside and got closer they realized I was his older kid and apologized, but it was funny now (and I was a bit horrified back then).

I grew older and within a couple of years I had put on a lot of weight. I still think I looked hot (well, I didn’t, but W always thought I did) and I looked a lot more like my mother’s side of the family, the viking norseman bloodline was a lot more evident and similarities to my father disappeared under my bulk.

Now that thirty years have gone by and I have recently lost all that weight I look different and my body has morphed closer to my father (except far taller, my dad was always shorter than me) and my grandfather on my mom’s side similarity has receded.

So now sometimes, with the beard coming out and the silver white coloring glinting in the light of the bathroom mirror I see memories of my dad. Part of it makes me smile, I loved him dearly. Part of me misses him terribly. I haven’t yet really talked about the horror of him passing away and the total fucked up situation my siblings put the whole thing through.  Maybe I am at a point I can do that.

Then part of me panics for a moment. Shame that I might “destroy” what is left looking like him living here in the world. It is a stupid thought. A fear that I am going to fuck something up. I realize this is more about fear of the unknown when it comes to the FFS, but that is how it comes out. That I might destroy the last remnants of my father that still live and look like him.

The worst part is that is quickly overridden by the gut sick feeling I see of myself when I see that facial hair coming through. I never understood up until coming out and transitioning what it meant that I hated facial hair. I tried it a lot, I come from biker stock and it is part of the uniform, especially the mutton chops. I think a lot of the time it looked really good on me, better than without it. It didn’t matter though, I always hated it.

I hate it more now that I know FFS is coming up and there it is mocking me while I wait for the electrolysis to make it go away forever over a very long period of time. That however doesn’t stop the weird guilt and shame I feel over intentionally changing my bone structure and removing that beard forever. Don’t worry, that guilt and shame only last momentarily and then my desire for my true self to come out is stronger, but its there.

I know part of it is I just miss my dad a lot. He had a lot of problems, way more than most dads. In other ways he showed love a lot stronger than any dad I have met. It is complicated thing, but I think the transition is forcing me to deal with feelings. The fact that I see parts of him when I look in the mirror has made it harder. It doesn’t help we are coming up to the anniversary of his passing and I think with the anxiety of the surgery.

Sometimes I can’t even clearly define why I am upset about it, I am still working on it, trying to understand. I don’t know if all this will be is random emotions about my history, my life and experiences and complicated relationships, but that is why I write it down. Maybe in 20 years when I am closing in on 70 it will make more sense why I felt this way… or maybe I will still have no clue. 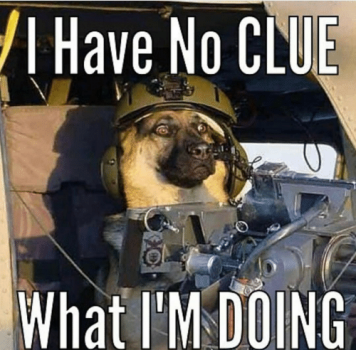 For now it brings out some sadness, a lot of dysphoria, but also a little smile when I catch my father in the mirror.